A grant from the MacArthur Fellows Program, commonly known as a “genius” grant, is the stuff that artists’ and researchers’ dreams are made of: a $625,000, no-strings-attached award to extraordinarily talented and creative individuals as an investment in their potential.
You can’t apply. You have to be nominated, then selected. Previous MacArthur fellows currently teaching at ASU include Pulitzer prize-winning poet Natalie Diaz and dance legend Liz Lerman. 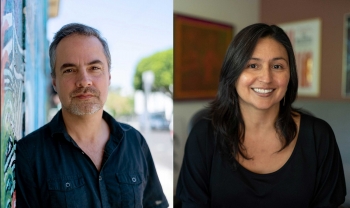 Alex: Before getting to know ASU, I’d never heard the mission of a university articulated with inclusion right at the top. That’s exciting. Innovation right at the top, too.That’s exciting. Cristina and I are coming to ASU to teach, to serve, but we’re also coming as researchers to try to see if we can accelerate our production and the production of a generation of LatinxA gender-neutral or nonbinary alternative to Latino or Latina. artists, borderlands artists, who’ve been excluded from Hollywood and also, in many ways, excluded from the academy. The center for this work will be a new research lab. The idea is to create a whirlwind of activity: new research, new knowledge, new cinematic production, to address the crisis of Latinx under-representation and to teach students — and the world — how this cinema can be made and what it might look like. This is a “moon shot” for us, and it feels like ASU, with its focus on inclusion and innovation, with the interest at The Sidney Poitier School in applied learning, is the right place to make it happen. 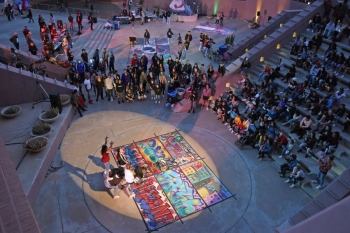 Download Full Image
Friday night features more free fun for ASU students and the local hip-hop community. Randolph will join Daniel Tran and other guest artists to teach dance workshops in a collaboration with ASU student organization AZNA Dance, an Asian-American hip-hop and R&B dance team.
The main Sol Power event is Saturday, co-hosted by Jorge “Bboy House” Magana, ASU clinical assistant professor, and ASU alumna Melissa Britt, who cofounded Sol Power (then called Urban Sol) to help create a home for hip-hop culture while a professor of clinical dance at ASU.
On Sunday, the final day of the festival, dancers of all styles are encouraged to attend ExperiMeant It! — a reimagining of dance battles designed to bring together different communities of dancers for an intentional gathering of creativity. It is the brainchild of MFA dance student Angelo Sapienza, known in the artistic community as Vo Vera.
Here he shared more about the dance-battle event and the design behind it.
Editor’s note: The following interview has been edited for length and clarity.
Question: What is “ExperiMeant It!”?
Answer: In short, this event is an experimental approach towards bringing different communities and knowledge together to an event that meets wider audiences than such an event might normally.
Usually events like this bring together most of the hip-hop and street dance community with the battles being free and public. Being on the ASU campus, we expect to bring out a lot of the ASU community. I’m also trying to get other communities to come out. For example, the keynote speaker is an Indigenous man and drummer with some incredible knowledge to share. He’s going to speak for a few minutes and also participate as one of the music makers for the final battle of the event along with the DJ.
I’m hoping to bring out more people from that community, and also dancers and artists from the greater Phoenix classical and contemporary community.
Q: Where did you get the idea for the name?
A: Someone from my street arts collective, The Sacred Gs, came up with it. Intention is a big driving factor in what we do. We are not called The Sleazy Gs; it’s meant to be very intentional because the words that we use have power. We have been doing work since 2014, bringing aspects of the hip-hop street dance community to other communities — like performing at a yoga festival or music festival. I guess you could call them more intentional communities. Instead of people going to a bar, listening to music and enjoying the experience, this is something a lot more sober. There’s no alcohol, and it’s an all-ages event.
Q: How did grants make this event possible?
A: The grant from the Arizona Commission on the Arts really set the groundwork for this event. I received another one, the Herberger Institute Creative Constellation grant. Grants literally made this entire thing possible. My eyes are bigger than my budget, and I am able to fly out three different artists from different parts of the country. I’m able to pay the artists, from DJs to judges to the hosts and speaker to the people documenting the experience. Everybody’s getting paid, and that’s really important for me, too. The grants definitely made all of this possible.
Q: What should people know before they come?
A: It is a free, public, all-ages community event. They can bring themselves, their friends and family. If they’re dancers or interested in dancing, they can bring their inner dancer and get down. It’s going to be a little wild and experimental. It’s not necessarily going to be traditional street dance battle music. In fact, I’m still in dialogue with the DJs about what that’s going to look like.
Another way that it will be experimental is during some rounds we’re going to be providing prompts, and then the dancers will use that prompt to guide their movement. The judges will be using that prompt to guide the way that they judge that round.
It’s going to be a very unique platform for all attendees. It’s definitely taking people out of their comfort zone and into the spheres of unknown.
Q: What are you most excited about for this event?

A: I’m going to offer an opening incantation, and I’m going to speak a little bit at the beginning of the event about some of my research into Indigenous older communities throughout the world, and how they’ve used dance for spiritual purposes, and the significance of the circle in their dance and in their lives. I’m very interested in the spirit having the human experience, or even just the human having the spiritual experience, in that dance-laden circular community setting. That gets my heart pumping to speak about that in public.